What Birds That Look Like Cardinals But Is Not? Pyrrhuloxia birds resemble cardinals and are frequently referred to as desert cardinals. Like the northern cardinal, this species may be found throughout the Southwest and has a beautiful crest. On the other hand, male pyrrhuloxias have a distinct coloring: they’re primarily grey with red highlights.

This bird resembles the cardinal in appearance and size and has a distinctive crown. The two birds, however, have significant variances.

The male hepatic tanager seems red from afar, but closer inspection reveals additional orange feathers on the crest, chest, and abdomen. The rear feathers are brown or tan. The hepatic tanager is distinguished from the cardinal by its absence of a crown.

This tanager has an orange-red face and a tan spot right behind the eye. It also has a longer and more pointed grey beak. This bird also possesses a remarkably smaller tail than the cardinal.

The male hepatic tanager possesses red on different segments of its body, but not to the extent that the male northern cardinal does. Additionally, the red color is more likely a blend of orange and red coloration, with light brown parts. Cardinalidae is the same family as the two birds. Other distinctions include:

The house finch is shorter than the cardinal. It has a redhead and a few additional red feathers mixed with brown feathers. One of the primary distinctions between the house finch and the cardinal is that it does not have a crown.

The house finch’s face is browner with red stripes, and the black face mask is absent. The house finch also has a brown beak and a shorter tail than the cardinals. It has tan wings as well.

Although the phainopepla has a similar form and size to the cardinal, the coloration is different since the phainopepla is completely black. It also has a grey beak and a black crown that is shorter.

Because it resembles a cardinal, the phainopepla is usually referred to as the “black cardinal.” There’s no denying that the faces’ structure, size, and hue are identical, yet the overall color could not be more unlike.

The phainopepla is black, with the male cardinal being red and the female being predominantly buff-brown. The phainopepla’s body is likewise a little slimmer than the cardinal’s. The male pine grosbeak and the male cardinal are identical to each other on the basis of the body size but still, we have many differences that are quite remarkable.

Read:  When Do Cardinals Lay Eggs? The scarlet tanager, like the cardinal, has a lot of vivid red plumage. This bird, on either side, will not have an upright crown. Despite having a black ring around its eye, this bird lacks the cardinal’s black face mask.

This bird has a significantly shorter tail and a tan bill that is larger and more pointed than the cardinal. The scarlet tanager has black feathers and a black tail, another distinctive feature. This bird, like the male cardinal, is all red. On the other hand, the summer tanager does not have the same elevated crown. It’s also a tiny bird that lacks the cardinal’s black face mask.

The male cardinal possesses an elongated tail, whereas the summer tanager inherits an intermediate-sized tail. The cardinal has a tan face with a charcoal mask, whereas the California towee has a grayish face. You may mistake this bird for a cardinal from afar because it is vivid red and has a black face mask. This flycatcher’s face mask, on the other hand, is more of a striped pattern that extends from the eye to the rear of the head.

The flycatcher’s wings and tail are likewise black, but its tail is considerably shorter than the cardinal’s. In addition, the flycatcher has a pointed black beak. 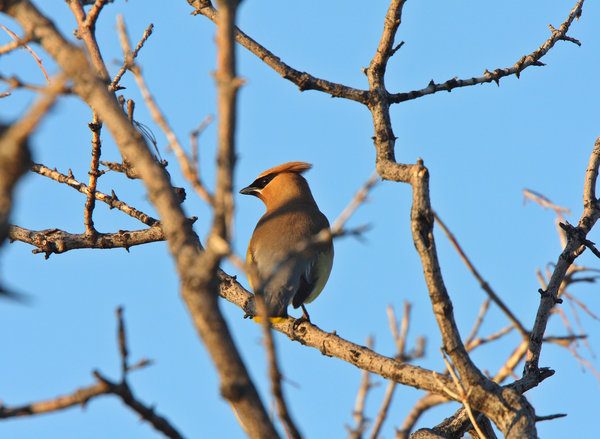 With a black face and a brown crown, the cedar waxwing is a brightly colored bird. It has a brilliant yellow tip on the tips of its tail and a yellow breast and belly. The beak is black and short.

The wings are tan and grey, with white and red spots. They look similar to cardinals, but their peculiar hue distinguishes them. The Red Crossbill is a bird that lives in the United States. Although it is dubbed a red crossbill, the bird’s feathers are more orange-red in hue. It possesses a larger brownish beak and a brown mask around its eye.

It also lacks the characteristic crown and has a shorter tail than the cardinal. Rose Finch is a bird that lives in the United States because of its vivid colors. These birds are occasionally mistaken for cardinals. The bird’s face and head are red, while the rest of its feathers are a mix of red, pink, orange, brown, and purple. It has a brown beak as well.

It’s worth noting that 16 bird species are closely related to cardinals. Some have the same vivid red colorings as the cardinal, while others have the tufted crown and might be mistaken for the cardinal’s more demure colorings.

Are all red birds cardinals?

No, not all red birds are cardinals.

What is the color of red crossbill feathers?

They are of orange color.

Is the vermilion flycatcher a cardinal bird?

They look alike but no vermilion flycatcher is not a cardinal.

What is the color of scarlet tanager plumage?

Their plumage is of red color.