Among the most typical hues for birds, feathers are yellow. From plain to colorful, light to dark, and anything in between.

This article will examine different species of yellow birds that may be spotted across America.

There are many yellow birds on this list, such as insect-eaters and seed-eaters, that frequently use the bird feeder.

By providing you with photographs, identification details, and details on when they migrate in and out, this article will assist you in identifying the yellow birds that you’ve seen.

Most Common Yellow Birds in America

We couldn’t possibly include all the birds that have yellow plumage throughout the year. Therefore, we pick a few of our favorites, which span a wide range of bird species and subgroups.

The American Goldfinch is one of the seed-eating birds which might take benefit from your garden bird feeders.

It is likely the most popular yellow bird in the United States.

The male may be identified by his brilliant yellow body, black crown, and black wings. The coloration of females is slightly more subdued, with a yellow head and a brown and taupe body.

They molt to a significantly muted olive-yellow color throughout the winter, then turn brighter again during the spring.

Throughout the entire United States, as well as in southern Canada and sections of Mexico along the Gulf, you may find them. 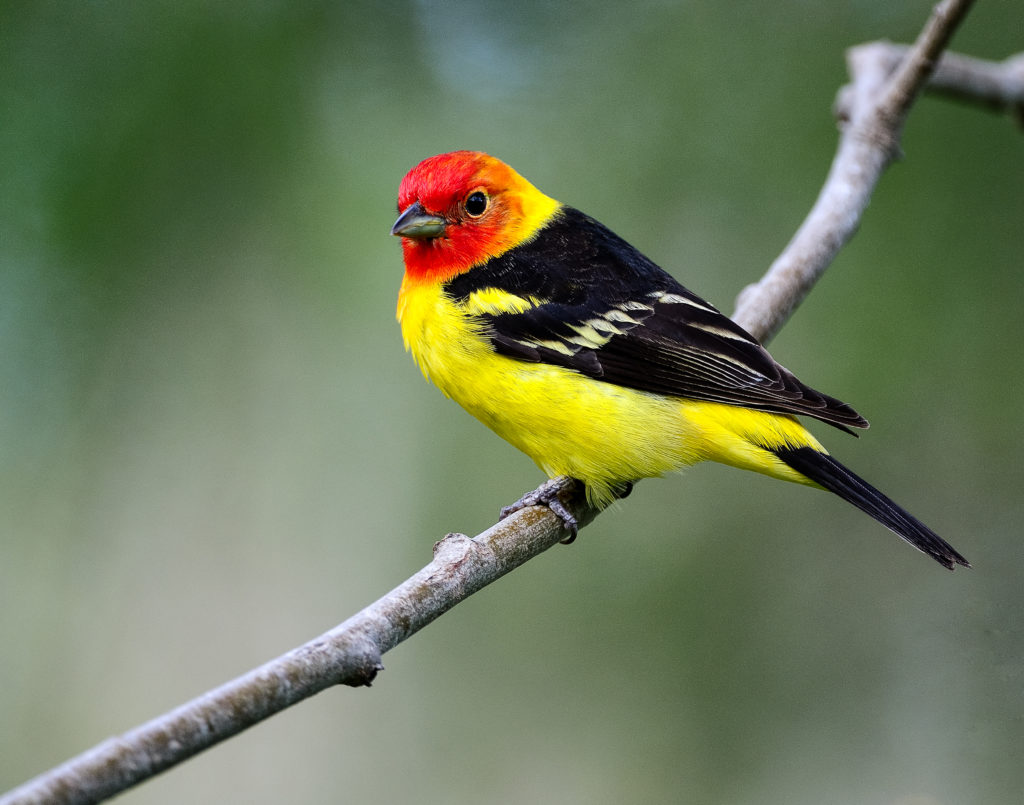 There is no way to ignore the Western Tanager. Males have vivid yellow necks, bellies, and tails in addition to a flame-colored forehead. Females are lighter and lack a flaming head.

Flower nectar, insects, and fruit make up their diet. From their wintering homes across Mexico and Central America to their summer nesting sites in western Canada and the United States, these tanagers travel a considerable distance.

Planting fruit-bearing shrubs and nectar-producing flowers, trees, and nectar feeders can draw Western Tanagers toward your backyards and suburban areas.

They will also occasionally visit these locations if they are provided. They are among the most colorful summer birds found throughout Canada. Their cries, which sound a lot like a robin’s, should not be ignored.

The Prairie Warbler inhabits areas other than prairies. Despite its misleading name, this yellow songbird likes to spend the summer across the Southeast’s new forests and dense, thick scrub. Throughout Florida, a distinct population year-round resides.

Yellow is seen on the throat, head, and stomach of adult Prairie Warblers. Two distinct black stripes distinguish males by the eyes.

Females have softer, more subdued coloration, with grey eye stripes and delicate, dusky grey wings. Males may have several female partners; however, they continue to assist in raising the babies from both clutches.

Southwest U.S. and Mexico are home to the vivid and lovely Scott’s Oriole. They choose yucca plant habitats for nesting, along with juniper, agave, and pinyon pine.

The Scott’s Oriole is a skilled insect eater, seeking far and wide for them and even acrobatically dangling to reach microscopic cracks.

They will approach backyard feeders containing supplied fruits, jelly, or nectar, much like other orioles. Males get brilliant yellow bodies with black heads and black wings. Females have dark yellow bodies and grey wings.

Females of several oriole species, including the Orchard Oriole, Hooded Oriole, and Baltimore Oriole, whose males are black and orange, will have a dull yellow appearance. The Yellow Warbler appears ubiquitous and widespread across the northern portion of the United States and much of Canada during the summer.

Both sexes have spherical, black eyes and are completely yellow. The breasts of males have rusty stripes. They prefer eating caterpillars over other insects since they are naturally insect eaters.

The edge habitats that include thickets near gardens, streams, and swamps are preferred by yellow warblers.

Their open nests, which are frequently invaded by cowbird parasites, are simple to identify. Yellow Warblers will construct a new floor over the invader egg and place other eggs as a means of adaptation.

For a little less than two weeks, both parents work together to nurture the chicks. Although they have a grey and brown spotted back, meadowlarks are easily identified by their brilliant yellow neck, cheeks, and abdomen.

Both species favor wide grasslands, barren fields, meadows, and pastures to graze, dwell, and nest. They are well renowned for singing when perched on objects like fence posts.

Their music can be used as a distinguishing factor. The cries of the Western Meadowlark are rich and deep, with a range of noises and sounds that is like a gurgling stream.

Eastern Meadowlark melodies sound clean and ungurgling, like a whistle. They can sing a greater selection of tunes in a louder voice. Another warbler that, like evergreens and lives among coniferous woods, seems to be the Black-throated Green Warbler.

In the coniferous woods of the Northeast of the United States and Southeast Canada, these insect eaters build their nests. Caterpillars are among their favorite snacks; however, they also consume berries during the winter.

Together, the men and females construct a nest from grass, twigs, and weeds. It’s a sturdy house that is typically built inside a tree branch’s nook near a tree trunk. The chicks are often taken for of by both parents, who divide up parenting responsibilities. The Blue-winged Warbler is among the prettiest yellow warblers across North America, with a yellow breast, forehead, abdomen, and bottom.

These warblers like the eastern Midwest’s successional field environments, particularly those within Pennsylvania, western Kentucky, and Ohio.

The female constructs cone-shaped nests by weaving leaves, bark, and animal hair together. 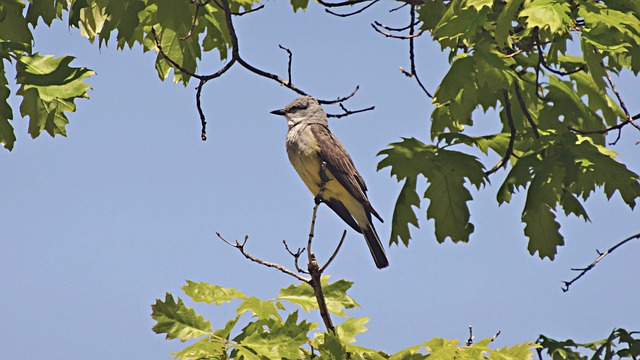 A Western Kingbird might be a frequent sight if you reside inside the western part of the country. These flycatchers are aggressive and social. By sitting on fences or shrubs and waiting for the right moment to attack, they search for their bug food.

They have a robin-like body form but radically distinct colors. Light yellow may be seen on the Western Kingbird’s abdomen and wing undersides.

Their top back can occasionally have a wash of yellowish-green color, brown wings, and a grey head.

There are several species of flycatchers, which are widespread in North America. The majority of them share the same coloration, which consists of a body and head that are grey and brown and a breast and abdomen that are brilliant yellow.

Western Kingbirds learn to adjust to built environments. In loud, densely populated metropolitan areas, they often care for their young while building nests in the crevices of telephone poles.

The Eastern Yellow Wagtail, a native of northern Alaska, has been a swift walker who primarily scavenges on the field.

Although it often jumps to catch insects that are flying through the sky, it likes to consume insects that it takes up from shallow water. They prefer to reside close to water bodies where they can easily obtain a variety of insects to feed on.

Birds called Eastern Yellow Wagtails nest on the land. The female constructs her nest on her own and attempts to bury it in bushes. It is often made of lichens, grass, and moss. Additionally, it has a feathers lining or soft material. This raucous, sociable finch will most likely visit your feeder, especially throughout the winter. The majority of these Grosbeaks may be spotted throughout Canada and far northern U.S. regions.

Put out sunflower seeds, the Evening Grosbeak’s preferred food, to draw it. Keep in mind that these birds have somewhat powerful beaks and can easily break open hard seeds, so stick to little seeds if you can.

Its eyes and beak are covered with a yellow eyepatch. On the back, abdomen, and bottom, the deep brown color of the head dissolves into a bright yellow hue.

The females are usually grey with a yellow tint, whereas the males have this vivid yellow hue.

Check out this article on Birds that are Yellow and Black and Types of Yellow Birds in Texas.

This article is about the common yellow birds that live throughout America. After reading this article, you’ll know how to recognize these birds.

Please do let us know in the remarks if you still have a concern.