Having a pet parakeet is fun when he does silly things around you all day to keep you entertained and get attached so much that it actually becomes a family member.

When parakeets get comfortable with their owner, they tend to show new behaviors and start to feel a bit different, and you may also notice a change in their activities like puffing up, or chattering a lot, etc.

Some owners get confused when their parakeet starts to puff up often, and they don’t know why their pet is doing this. There can be several reasons for a parakeet that he is starting to puff up often. To know why do parakeets puff up, we talk about several things related to parakeet’s behavior in this discussion. 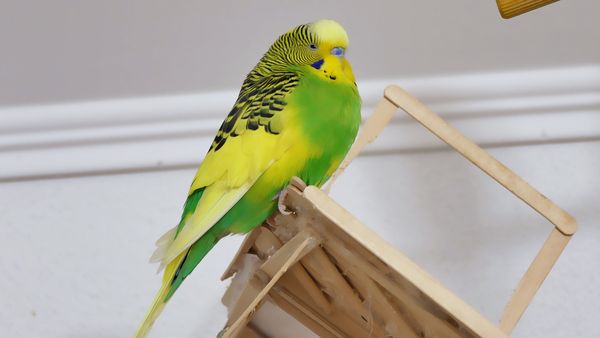 Why Do Parakeets Puff Up?

Normally, a parakeet may puff up to show to feel lighter and control and regulate the temperature of its body. You don’t need to get upset about its health as it’s just normal behavior that any parakeet would do on a regular basis.

But there can be a problem if you notice that your parakeet is puffed up for some time and it’s doing it again and again. This may show general signs of weakness, tiredness, or getting anxious.

You need to check the health of your budgie properly and understand the reason why it’s all puffed up.

There can be several reasons for a budgie or a parakeet to puff up.

Why is My Parakeet Puffed Up?

Usually, you can see a parakeet puffing up as its normal behavior, but there can be several reasons linked to its puffing behavior that may include the following.

Your parakeet may feel chilly or cold due to the weather or its health condition. It would start to puff up in order to conserve little body warmth. Puffing up helps them to get as much air trapped in their feather to conserve some warmth and stay inactive health.

If this is the situation, then your bird needs some warmth, and he would start puffing up to store more air in order to conserve it and keeps its temperature normal. When parakeets start to feel sleepy sometimes, they would more likely puff up their feathers to catch in some air and feel relaxed. This makes them cozier, and they enjoy a fine sleep afterward, which is why your parakeet is puffing up.

Puffing parakeet can also show signs of getting upset due to some reasons. Look for his movements and behavior as he may be upset if he is swinging his tail or keeping its wings a bit open from its body.

Another reason can be that your parakeet is not feeling well, and he is puffing up to try and relax. If your parakeet stays puffed up all day, then first and most importantly, try to consult an avian vet to get your pet checked properly for any health issues.

You can’t judge a sickness in a parakeet easily, so you will have to be more cautious about it. Get it checked because the sooner, the better to avoid any loss.

What A Parakeet Will Do If He Isn’t Feeling Well?

If your parakeet finds itself feeling a little cold or down, he will most likely puff up his feathers. This would help him keep his body warm from the air that is trapped in its feathers. The air warms with the body heat, and in return, the whole body of the parakeet stays warm.

Bathing behavior differs upon the character of your parakeet. Some parakeets like to shower regularly, and some don’t prefer to wash by any stretch of means. At the point when budgies want to wash or prep themselves, they’ll frequently puff up just before they have a decent gesture.

Budgies are social birds. Thus, they can utilize their feathers to give any message or to show a sign of anything. In case that your parakeet is showing something, he’ll puff up its feathers and wrap one of its feet up its chest and let its eyes close.

Read:  How to Tell Gender of a Parakeet? (Male or Female)

Positive And Negative Signs When Parakeets Puff Up

Every bird tends to show some signs when they puff up and that what your parakeet can do too. They will move in a particular way and puff up their feathers, and the owner has to know what is going on.

Parakeets do this behavior for certain reasons, and you must know if something is wrong with them. There are few positive and negative signs when they puff up. So you should know about them all.

The basic and first sign is that your parakeet is trying to control its body temperature. Puffing up is a bird’s way to retain heat and to moderate its body temperature. This is to help them survive in a cold environment as the wild birds mostly have to thrive in rough weather conditions.

You will sometimes see them shaking and puffing themselves up even when they are not sick or dirty. They just do it often to make themselves comfortable and wipe off any particles on their feathers.

When parakeets feel happy, they often puff up in a cheerful manner that shows a clear sign that your parakeet is happy due to some reason. These birds can display their emotions and behaviors in a number of ways so puffing up is very common in their gestures.

Illness can be a negative sign if your parakeet is staying puffed up for a lot of time. It’s a bad sign indeed either your parakeet is feeling too low in health, or he is having something going on with his health. Try to get consulted with any avian vet as soon as possible.

Parakeets also have emotions, and sometimes they also feel anxiety due to many reasons. When your parakeet is alone most of the time, and he doesn’t have any companion to talk with all day, or if he isn’t treated right, he may start to get anxiety which can lead to puffing behavior.

Other Reasons Why My Parakeet Is Always Puffy

In case that your parakeet gives off an impression of being puffed up most of the time, it’s necessary to check the temperature of the room in which its cage is placed. Parakeets should get the same temperate as a moderate temp in all conditions, no matter its day time or night time.

Parakeets should be at the correct temperature as they can experience the ill effects of heat-stroke or hypothermia at certain limits of temperature. With heat stroke, there are fewer chances of a parakeet’s survival, but with hypothermia, you get more time.

The symptoms may include:

If your budgie or parakeet is facing any of the above-mentioned issues, you need to rush to an avian vet for his goodwill. Your parakeet needs attention and medication, so don’t waste your time.

This was a detailed discussion about puffed parakeets and why do they puff up. We discussed various reasons for its behavior, and they can be positive and negative signs. It’s the owner’s duty to look for these signs and consult a doctor in case the parakeet is sick. For more discussion, leave a reply in the box given below.

Why does my parakeet puff up when I chat with him?

Parakeets puff up as a method of showing their excitement and getting noticed, so your parakeet is probably going to do it when he’s prepared for you to show him some adoration.

For what reason do parakeets puff themselves up?

Parakeets additionally puff up their feathers when they get truly familiar and attached to someone or when they are about to rest. A budgie may poof up for a couple of moments when they get cheerful or energized. Likewise, when a parakeet is showing off to another parakeet, he may puff up specific body parts, such as head feathers, and show the tail feathers.

For what reason is my parakeet shivering?

Shivering is a typical piece of a parakeet’s prepping schedule. When your budgie begins picking at quills or shivering exorbitantly, it very well may be an indication of tension, and you should take your budgie to be looked at by a vet.

Do parakeets understand and recognize their owners?

Parakeets are exceptionally clever bird groups with set up voice acknowledgment capacity. They can perceive their owner’s voices when appropriately trained. As pets, they love to invest energy in the people they have clung to.