There are 17 species of finches in North America.

Crossbills, Evening and Pine Grosbeaks, and Redpolls are a few of them.

All members of the Fringillidae family of birds have small, conical bills, short necks, and strong jaw muscles. Additionally, they have unique flying cries, notched tails, and rather pointed wings.

Types of Finches in North America

Above their forehead and upper breasts, adult male House Finch has rosy red skin. On their belly, tail, and back, brown stripes may be seen.

Females have brown backs, tails, and bellies with streaking. Both sexes have conical beaks and notched tails adapted for eating seeds.

In the US, it’s typical to observe House Finches close to people.

In parks, backyards, buildings, and some other urban settings keep an eye out for them. House Finches are frequently the very first birds to find new bird feeders, in fact.

Due to their keen curiosity and infrequent solo travel, other birds frequently use their arrival to locate your feeders.

In my yard, I saw them consuming safflower and sunflower seeds. The wings and tails of both sexes are tiny, dark, and striped with delicate golden edges.

Long pointed wingtips, a short, forked tail, and a sharply pointed beak. The only sparrow in America with identical male and female physical characteristics.

The sociable pine siskins hunt for food in groups while constantly chirping at one another. Even when flying, they don’t even stop talking!

Winter is the season when pine siskins often eat at backyard feeders. They like eating smaller seeds with softer shells, like sunflower seeds.

Usually found in mixed-evergreen or deciduous forests, pine siskins will occasionally venture to weed species fields, backyards, or gardens in quest of food. The stature of an Evening Grosbeak, both sexes have a huge, thick, conical beak.

Males have a strong yellow stripe above the eye and are black and yellow with a noticeable white spot on the wings.

The majority of females are grey, with greenish-yellow highlights on their flanks and necks, as well as white and black wings.

One of the biggest finches in the country is the evening grosbeak.

Normally found in northern coniferous forests, they may be spotted pretty much anywhere in the winter as they look for food.

Read:  14 Types of Finches in California

Evening Grosbeaks are distinguished by their big, powerful bills. These bills allow them to break open huge nuts that other birds can’t. Males also have raspberry redheads, belly, and back, while females have striking face markings, along with a creamy eyebrow and a black line on the side of the neck.

They are little birds with cylindrical seed-eating beaks.

Beautiful male Finches are characterized as having a raspberry juice-dipped appearance.

Large beaks and tongues are used by Purple Finches to break seeds and remove nuts.

They will also frequent bird feeders, which is wonderful news! Black-oil sunflower seeds are your best bet for luring them in.

Pine trees in your backyard are another excellent approach to attract these birds.

Due to their striking resemblance to the more typical House Finch, Purple Finches can indeed be hard to distinguish from one another.

This is a mistake I’ve made several times, thinking I spotted a Purple Finch when in reality, it was another House Finch. Look at their backs to tell them apart. Birds with big, triangular beaks that are stocky. In size to an American Robin. Males have white breasts, black backs, and wings, along with a recognizable red mark.

Females have a light beak and white eyebrows. They are highly streaked. It’s clear where the name of these stunning birds came from.

The males’ brilliant crimson plumage that covers their white breasts is readily noticeable when you take a close look at them.

Females, in contrast, hand, might be challenging to distinguish because of their similarity to many other species.

The Rose-breasted Grosbeak enjoys stopping at bird feeders when it cracks open seeds with its enormous triangular bill.

Sunflower seeds spread out across a platform feeder are the ideal food to use if you wish to attract them.

Sometimes the male plays hard to get when the female comes up, denying her for 1 or 2 days before ultimately embracing her as a mate.

They compensate for this by giving their female a pause and sitting just on the nest to maintain the warmth of the eggs.

The Rose-breasted Grosbeak is renowned for its lovely voice.

Better than an American Robin, it has a comparable sound. Keep an ear out for a long succession of rising and falling sounds.

Be sure to seek for the male chirping from a high perch if you hear one. They are tiny, whitish, and brown for both sexes. Look for reddish patches on their forehead and stripes down their sides.

Read:  10 Types of Finches in Missouri (with Pictures)

The upper flanks and chest of the males are covered in a faint crimson waistcoat. Redpolls use bird feeders in backyards, especially in the winter.

When visiting feeders, they prefer to consume little nuts like Nyjer (nettle) and shelled sunflower because of their small bill size.

Common Redpolls fly in a manner akin to a rollercoaster, much like most finches in the US. Several hundred birds strong, redpoll groups can travel together.

They are quite nimble, collecting seeds in sparsely vegetated areas or under little trees one minute, then swarming away in a commotion of chirping birds the next. Male Cassin’s Finches are rosy pink throughout with greater red on the top of their heads, while females and young birds are white and brown birds with dark stripes on the breast and underparts.

Tiny finches with less will, streaked plumage, and thick bills.

The red berries of firethorn trees, one of the colorful foods that male Cassin consume, give them the red on top of their heads.

In the winter, Cassin’s Finches frequently feeders with sunflower seeds.

It’s interesting to note that they love salt and frequently explore mineral formations on the ground.

Both females and males sing, and their melodies frequently mimic those of other birds. Big, chubby finches. Male Pine Grosbeaks are reddish-pink and grey, while females and young males are grey with tones of dark red or yellow on the forehead and rump.

Pine Grosbeaks are one of the biggest species in the United States. Look for a dark grey wingspan with three white lines from across the middle.

They are often simple to identify if one arrives on your feeders since they are larger than the majority of birds.

Pine Grosbeaks attend feeders regularly, particularly in the winter. Because of the bird’s bigger size, consider utilizing a feeder or platform feeder if you wish to draw them in. Put sunflower seeds in the feeders.

Due to their sluggish demeanor, Pine Grosbeaks are rather simple to locate and observe.

Additionally, they aren’t readily startled and are rather docile.

Male Pine Grosbeaks make an up-and-down, high-pitched warble as their song. Below to hear Females don’t sing all that much.

Small, pale white avian with dark-gray wings and tails and striking white wing bands. Feathers are fluffy, giving them the appearance of being heavier.

Look for little red spots on the forehead.

The reddish-pink chest is absent in females, whereas it is present in men.

The Hoary Redpoll can endure harsh winter conditions and breeds on the polar tundra.

Due to the lack of civilization where these finches reside, many people never see them.

Hoary and redpoll, which relate to the red spot on their heads, are the names given to them for their outward appearance.

Due to their northern summer residence, these finches are seldom visitors at bird feeds in the United States. However, when it becomes cold, there is a lack of food.

If you’re very lucky, you could observe one roaming your yard munching Nyjer nuts or black-oil chia seeds.

This enables them to gather seeds fast and regurgitate them when they are back in a protected area so that they may be husked and eaten. Males have a glossy black crown, white spots on the wings, and a brilliant yellow underside.

Their black tails and backs can also be shiny black or occasionally dull green.

One of the smallest finches found in the US is the lesser Goldfinch. Keep an eye out for these birds congregating in sizable flocks, which can contain up to many hundred individuals.

They fly in a manner similar to an American Goldfinch roller coaster.

These little birds consume sunflower seeds as well as the thin-hulled Nyjer/thistle seeds. 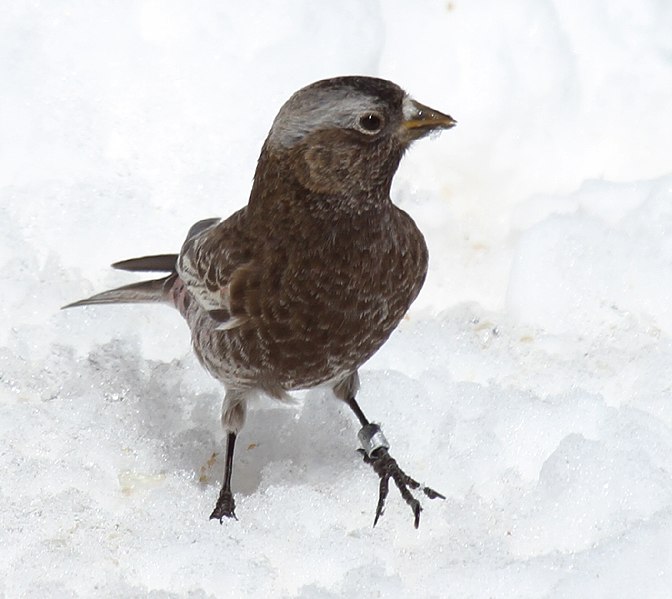 Finches of medium size and bulk, with a conical beak and a hooked tail.

Males are brownish with pink accents, a yellow beak, and occasional pink spots. Females have a grey head, pink accents on the forewing and lower belly, and an overall blackish color. Their bill is black.

These extraordinary birds are called Black Rosy-Finches. In the summer, you must ascend beyond the forest line to locate them.

They build their nests in remote highland locations and along the edges of cliffs.

They descend down the slopes a little in the winter to avoid the cold. They congregate in sizable groups and roost in barns, mineshafts, and caves.

Even in the winter, Black Rosy-Finches will frequent bird feed in the United States.

There are about 17 species of Finches in North America.

All members of the Fringillidae family have almost the same general features.

Some of these Finches have almost no differences in both genders, like the Pine Siskin.

Some of these Finches are a little social, while the others are quite the opposite.