Besides being arguably the most influential region for Hollywood, water sports, and hot coastlines, California also has a plethora of birding options. The state is home to a variety of hawk species.

When you consider California’s various habitats, such as the Mojave Desert, inland marshes, the fog-shrouded redwood rainforests, and parched chaparral, this comes as no surprise.

A dozen different kinds of hawks may be found amid California’s various birds of prey. The region has a variety of birding sites where you may see hawks as well as other bird species.

From the woodlands and rocky coasts of the north towards the highlands of the east, you’ll be fortunate to see a range of hawks across the state.

In this post, we’ll look at the several types of hawks that may be seen in California, as well as the optimum periods to search for them.

Different Species of Hawks in California

Hawks are found across California and are either year-round inhabitants or constant inhabitants for a minimum of one season.

Red-shouldered Hawks, Cooper’s Hawks, and Red-tailed Hawks are the three year-round species of hawk in California.

Northern Goshawks, Rough-legged Hawks, Sharp-shinned Hawks, Northern Harriers, Swainson’s Hawks, and Ferruginous Hawks are among the numerous hawk species that may be found in the state.

One of the most frequent and ubiquitous hawks in North America is the Red-Tailed Hawk. Year-round in California, they may be found on the fringes of forests, prairie groves, open woods, and pretty much any other region with trees or high perches as well as vast hunting grounds.

During vehicle drives, these hawks can be seen leisurely circling above wayside trees or perched on traffic signals or poles.

If the breeze is powerful sufficient, they might use it to their benefit and fly without flapping, looking for tiny rodents and some other food.

These hawks are huge buteos, having long, broad wings and rounded corners, and short, flat tails which sweep out in flying.

Their tails feature a bright red color on the top feathers and light feathers beneath, as their name suggests.

Californian Red-tailed Hawks, on the other hand, may come in a variety of colors since birds west of the Mississippi are commonly colored differently, varying from very black morphs to light, cream-hued morphs.

All along the coast of California, these hawks can be seen in wooded areas with open-top canopies, particularly near marshes and wetlands. They’re also frequent in forested suburban areas, where their characteristic “kee-ahh” cry may be heard before they’re spotted.

During courting, red-shouldered hawks produce a similar screech. They will sometimes fly away simultaneously, rolling over and traveling small distances on their backs, in a strange courting ritual.

In the crotches of woods, the female and male labor together just to make stick nests. They attack by perching and swooping in to get their prey.

Do you like to cool yourself in the summertime with a cold beverage? Likewise, red-shouldered hawks! They will devour cold-blooded food such as crayfish and frogs during the hotter seasons.

These hawks may grow to be 15 to 19 inches long and up to 27 ounces in weight. A wingspan of 42 in is the limit. The wild has a two-year life span.

Northern Harrier males may feel free to put on a good show throughout the breeding season since their scientific term includes the term circus.

Northern Harriers reproduce from as low as sea level just on the coastline to as high as 9,000 ft in California’s Inyo National Forest’s Glass Mountainous area.

Wide, treeless environments, such as wet meadows, grasslands, and fresh and saltwater marshes, are preferred by these hawks.

They build their nests on the grass and prey on tiny rodents and waterfowl that fly closer to the ground and tilt from side to side while they hunt.

California lost roughly 26% of its natural grasslands from 1945 to 1980. This deterioration of breeding places is thought to be the reason for their diminishing populations in the state.

The California Department of Fish and Wildlife has designated them as a Bird Species of Special Concern.

Male Northern Harriers have gray tops, white abdomen, black wingtips, and black-banded tails. Females, on the other hand, are dark with brown streaks running through their white coloration.

On the back of both female and male bodies, there is a prominent patch of white. These hawks are thin, with wide broad wings and curved tails.

Swainson’s hawks are only seen in California for 6 months of the year, from April until late August, when they are mating.

These hawks subsequently say their goodbyes and go southward. They travel in large “kettles” with thousands of other birds towards Brazil and Argentina for the wintertime. A two-month, about 6,000-mile journey.

Californians might be relieved to see Swainson’s hawks returning each year. since their survival was jeopardized in the early 1990s after tens of thousands of dead and injured birds were discovered scattered over the state in their winter habitat.

The hawks were discovered to be poisoned after consuming grasshoppers (a favorite diet) which had been exposed to hazardous chemicals used on sunflowers fields.

Swainson’s hawk populations have improved significantly of a coordinated campaign to make the use of this herbicide illegal.

Swainson’s have a dark brown top and a lighter-colored belly. Closer to their bodies, their wings are dazzling white, which contrasts sharply with their black-tipped flying feathers.

These birds reach a maximum length of 22 in, a size of 48 ounces, and a wingspan of 4-1/2 ft. They are frequently seen on telephone poles, trees, or flying. In the habitat, they can survive for 16 – 19 years. 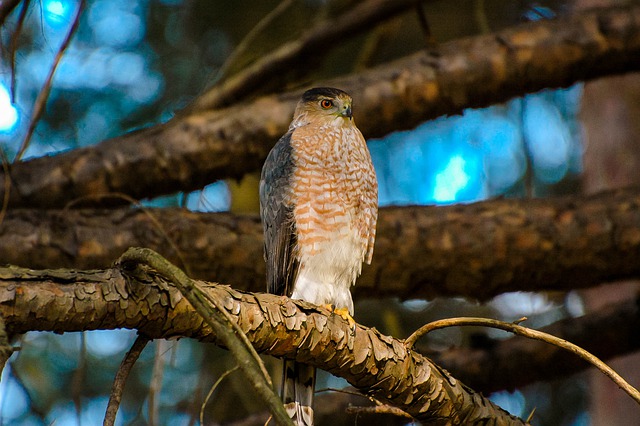 If you enjoy watching songbirds at backyard bird feeders, keep an eye out for Cooper’s hawks. These sly predators will lurk in deep cover before launching a surprise attack on tiny birds.

They also like to eat mice and squirrels. It’s no surprise they go by other nicknames like Striker and Big Blue Darter, given their aggressiveness.

Cooper’s hawks live year-round in California and therefore are distinguished by their steel-gray tops & white underbelly with orange striping. They may reach a maximum length of 20 in and a mass of 24 ounces, with a wingspan of 35-1/2 in.

These little, crow-sized species with curved wings & tails make their nests in deep, old woods in California. They are only found in regions where there are more open fields for hunting.

Females lay 3–5 eggs on average, and males, not females, are the ones that make their nests. In the habitat, they can live up to 12 months.

Sharp-shinned hawks are also another hawk species that may be seen yearly in California, particularly in the state’s mountain areas.

They have gray coloration on the front and thus are lighter underneath with orange striping, identical to Cooper’s hawks. They possess squarish tails and small rounded wings.

These quick-darting, graceful hawks, similar to Cooper’s hawks, like creeping up on songbirds and attacking them, especially around bird feeders.

Reptiles, frogs, insects, and small mammals compensate for 90 % of their diet. They are also known to consume robins, thrushes, and insects.

Sharp-shinned hawks may reach a length of 13.5 in. Males weigh 3-4 ounces on normal, whereas females weigh 5-7 ounces typically. The usual wingspan is 17-22 in. In the habitat, they usually survive for 3 years.

This year-round California inhabitant is possessive, secretive, and ferocious, preferring to breed in old-growth, mostly coniferous woods with a deep canopy.

The high northern mountains, as well as the Los Padres National Forest, are perfect breeding grounds. Because of the decline of the population due to timber exploitation and wildfires. They have been listed as a Bird Species of Special Interest.

The upper body of the Northern Goshawk is usually slate gray, whereas the undercarriage is typically light gray with striping.

Their heads are black in hue, with a distinguishing white brow & dark red eyeballs. Northern Goshawks are aggressive hunters who eat insects, animals, birds, as well as reptiles.

These hawks may reach a length of 16 to 27 in and weigh up to 50 ounces. Their wingspan can reach 50 in. In the wild, Northern Goshawks can life span up to 7 years.

Rough-legged hawks live their winters in California, while Swainson’s hawks spend their springtime and summer there. They spend the remainder of their year in the Arctic tundra.

They are sitting on poles or hovering in the air against the winds. They would examine open territory in searching for food.

Hawks can sense color as well as UV irradiation, and most of them could see it. Rough-legged hawks would search more of it in regions irrigated with vole urine, according to research, since they know they might locate prey.

Is it possible for them to smell it from such a greater distance? No. Rough-legged hawks may view the trash because it is visible in ultra-violet radiation to them.

Rough-legged Hawks are large birds that may grow up to 25 in length. Males may size up to 3 lbs, while females can reach up to 3-1/2 lbs. The wingspans of these hawks are approximately 5 ft.

Rough-legged hawks have plumage that extends all the way to their feet. It helps them stay warm in the frigid Arctic climate. In the habitat, they can survive up to 18 years.

Ferruginous Hawks enjoy wide, dry areas such as meadows, prairies, and forest borders. They’ve been known to make massive nests on treetops, on rocky ledges, as well as on power poles or other man-made constructions.

Their long, broad wings and thick gray tails distinguish them as the biggest of the North American hawks. Ferruginous hawks have a wide range of colors.

A few are lighter in hue, with a rusty back and pale abdomen, while some are dark brown with chestnut underbelly colors. Ferruginous hawks feed mostly on small animals.

They are renowned to hunt on the land, often following after creatures on foot. They may be seen confronting the wind hovering above their feeding sites in search of food.

Ferruginous hawks can grow to be 27 in long, weigh 5 lbs, and have a five-foot wingspan.

Check out this article on the Types of Hawks in Colorado.

Because red-tailed and Cooper’s hawks are year-round inhabitants, they are the easiest to find among the 9 hawk species that live in California.

Although red-shouldered hawks are regular inhabitants, they prefer to nest in western areas. In contrast to the Northern Harriers, you could see the Rough-legged, Ferruginous, and Swainson’s Hawks whenever you travel California in the wintertime.

Sharp-shinned hawks and northern goshawks can be seen all year round in the northern parts of California. Nevertheless, their dexterous hunting and secretive habit necessitate a skilled birdwatcher.

So don’t be disheartened if you don’t see these species straight away if you’re fresh to birdwatching.

In southern California, what sort of raptors may be found?

A hawk with a black and white striped tail is what species of the hawk?