Are you looking for the most common birds in Nebraska, USA? Have you been wondering about what are the birds visiting your backyard?

It has been recorded that Nebraska has almost 440 types of bird species. Of these, the most common bird throughout the year in Nebraska is the American Robin, which has a frequency of 51 percentage points.

American Robins do not feed on seeds, so they are not commonly seen around the bird feeders. Instead, you will see them usually looking for food on the floor. They usually feed on the invertebrates like worms, snails, and insects. You will also see them eating fruits.

If you see them in your backyard, it will most likely be a sight of them on the ground, eating an earthworm instead of hanging around and eating from the feeders.

American robin commonly nests nearby places where there are a lot of people. Their nest has the shape of an open cut consisting of beautiful and distinctive colored eggs. These beautiful baby eggs are about three to five in number and are light blue colored usually.

This exotic natural bird resides in the southern half at a colder time of year and is an inhabitant of the northern parts of the United States too.

Mourning Dove occurs commonly in Nebraska by a frequency of 40 percentage points, so a lot of people are familiar with this dove. This species, just like its beautiful name, has a beautiful grayish color with its wings having some patches of dark black on them. They have legs longer than most birds with an eye ring of blue color and a black colored bill too.

If you want to identify the mourning bird in your surrounding, you can look for them on the ground because that is where they usually feed. You can also find them in tall tree peaks or some telephone wires.

This beautiful bird has already attracted most of the visitor’s or residents’ attention. Usually, people misunderstand it with woodpeckers, but through the features mentioned below, you will be able to recognize them easily the next time you see them. Dark-eyed Juncos are a type of sparrow found in open spaces, on the ground, and woody areas. They are the inhabitants of the Appalachian Mountains and the west throughout the year, so they do not migrate to other places.

To attract this beautiful creation, you can simply put up bird feeders in your backyard. Make sure to add Nyger, millet, corn, which is cracked, and peanuts which is their favorite, to their feed. They prefer feeding on ground or platform feeders.

The most common birds seen in the state of Nebraska. Blue jays are songbirds that have a crest of blue color, the bottom of white color, and backs with black and blue color. These birds are easy to differentiate from other birds because of their most blue-colored appearance.

You will hardly see them alone while traveling larger distances. They usually travel in groups. They are migratory too and usually migrate flying in large groups from the northwest parts of the US and into the Great Lakes and Atlantic coast.

You will find them near the forests and places with a lot of greenery as they love eating acorns, so you will most likely see them near the oak trees. They feed on nuts, seeds, grains, insects, and sometimes on eggs of other birds too. The Common Yellowthroat bird or Geothlypis trichas is one of the most common birds and is seen in large quantities throughout North America. It is a tiny-sized bird from the Parulidae family.

The male and female Common Yellowthroat can be differentiated easily from one another depending upon certain features. These have sexual dimorphism, and the males have the distinction of a full black face. While generally, males and females both have light yellow or lemon colors.

American Goldfinches are among the most familiar and popular birds. These birds have distinctive features for both males and females, with females being more dull-colored than the males during the cold seasons. The males will be seen with black and a striking yellow color during the spring period.

These are commonly found and seen around the public parks, backyards of one’s home, sunflower fields, aster plants, weedy fields, and through the suburbs of the city. If you want to attract and take care of an American Goldfinches bird, then you can attract them to your backyards by putting ou Nyger and sunflower to your bird feeders. Sooner or later, these birds will show up. 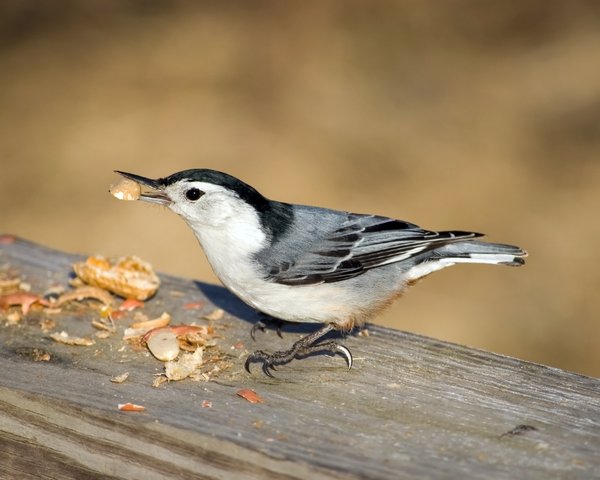 White-breasted Nuthatches are tiny but full of energy. They are super active, and you will hardly see them resting anywhere. On their backs, They are grayish-blue colored, on their lower belly they have chestnut color, and on their face, they are black colored.

You can find these birds in different places, for example, in the forests, edges of the woodlands, backyards, parks, and on trees and at feeders eating varieties of foods such as caterpillars, spiders, and beetles, etc. or seeds and nuts such as sunflower seeds, acorns, hawthorns, and sometimes corn crops.

Their way of eating acorns and nuts is very interesting. They would stick them in between the large tree barks and then whack them open to get the seeds from them.

If you wish to attract them to your homes and your backyard feeders, then you should add seeds of sunflower and peanuts to the suet and tube feeders. This will prove to be effective as White-breasted Nuthatches love these, so it will surely visit.

Check out this article on Types of Birds That Start with Q.

All the information about the most common birds in Nebraska has been provided above. With the help of all this information now, you can easily differentiate between different birds and guess their species type. With a lot of diversity and beautiful birds, Nebraska has a lot to offer. If you are a resident there, luckily, then you can simply attract all the birds to your home feeders by putting out their favorite food in this tray, set, or platform feeders. It would be fun to have visitors with such beautiful voices. They will not only accompany you but also sing for you some really beautiful songs.

What birds are found in Nebraska?

The list of some of the birds that are found in the state of Nebraska are as follows:

Are there finches in Nebraska?

Yes, there are. Goldfinches are year-round residents in the eastern parts of Nebraska; though not as bright as these finches are in the summer season, winter finches are great fun, and frequent visitors to tube or suet feeders provide thistle, Nyger, and sunflower seeds

Are there mockingbirds in Nebraska?

Yes, Nebraska has Northern mockingbirds residing in the open spaces like the woodlands, parks, farmlands, and the edges of the forests, not the heavy forest areas. The male mockingbirds have the skills to learn around 200 different songs throughout their lifetime. Only the males sing the spring songs.