Arkansas State is famous for its natural and beautiful habitat with rivers, lakes, mountains, waterfalls, parks, hot springs, and diverse animal and birds species. People from everywhere in the United States come to spend their vacations in this State to get close to nature.

There are above four hundred and twenty-one species of birds reported till now in the State of Arkansas.

Arkansas state bird is a Northern mockingbird that is mostly seen in open spaces and is most popular among farmers because of its beautiful songs that it can sing throughout the day. The most common is Northern cardinals, after which Carolina chickadee, indigo bunting, ruby throat hummingbird, etc., are common.

The rarest bird, on the other hand, is Ash throat Flycatcher. These birds are common in Oklahoma, Mississippi, Missouri, too, as they form borders with Arkansas state.

You will find Northern Cardinals in bushy areas or visiting your backyard feeders. They are quite comfortable around humans, and you will see them flying or hopping near you on the ground. There is a specific time called the “Cardinal Cocktail Hour” that is named after their habitual routine of feeding on safflower at the start of the morning or by the end of the day.

Northern cardinals are very popular throughout the United States of America, so whenever one is passing by, people can easily identify it. They are usually the residents of random dense bushes and tall elongated trees that are not too far from the bird feeders. By keeping the least distance, they can easily get their food whenever hungry.

Both male and female Northern Cardinals have different identifying characteristics; for example, the male species has a full face covered in a black-colored mask with feathers of bright red color. On the other hand, females have a dull and lighter tone with a little bit of blend of red and brown color. Their beaks are reddish-orange. Carolina chickadees are the second most common bird in Arkansas after the northern cardinals. These are tiny, lightweight, and carry a cap of black color on their bulky heads. Their throats are also black-colored, which helps with their identification. Unlike many other birds who fly away as soon as they get a hint of a human appearance, these birds are not afraid of humans and will not bother if you pass by or appear in front of them.

Just do not try to make any close contact with them because that will scare them away.

Their wings are feathery and have gray color, just like the backside of their bodies. Their cheeks form elongated white strips that stretch from the front all the way to the back of their heads. Its white cheek is the best identification hint. You will find them in city parks, forest areas, and bird feeders.

They are equally similar to another chickadee called Black-capped Chickadee. Their scientific name is Passerina Cyane. The Indigo bunting has varying characteristics for both sexes, which makes it easier to distinguish between them. Males stand out because of their bright and sharp features that can be easily detected from afar.

Males have white color over their bodies, and their bodies are fully covered in indigo blue colored lines that are strikingly bright and beautiful. There is also a long and thin line that moves from the front of their eyes.

They are overall medium-sized birds with almost an equal and medial length with a grayish tone of tail and wings.

Females, on the flip side, are not very striking, but they are easily differentiated by their colors. They have an olive, brownish color all over their bodies and have a crest. Their lower parts close to the stomach are of dull shades and have a white-colored neck which makes it look like there’s a partition of the head and body.

Males have a distinctive blue color in them which grows over their whole bodies as the years pass by. Their bills are sharp at the edges and have medium size overall. 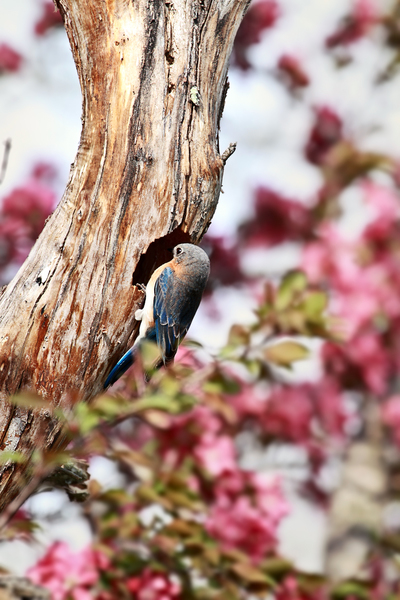 Eastern bluebirds are also known as the western bluebirds or as the rusty browns. Usually, when something becomes common, people might not pay attention to it, but for Eastern Bluebirds, it is not the case. Even though these birds are common throughout Arkansas yet they are still very popular and adored by bird watchers.

They have a very beautiful combination of colors which helps them stand out from the rest of the common everyday birds. They can stretch up to the maximum size of about eight point one inches in length.

They have different identification hints for both sexes of male and females; for example, the male Eastern Bluebird is of blue color with its stomach area being a combination of red and white color. On the other hand, you will notice that the females consist of grayish color on their tails and wings with blue spots on some places.

These birds are not aggressive birds, so they do not harm other birds. Mainly it feeds on the nectar of the flowers and slits the plants through its sharp beak. Another extraordinary feature of this bird is that it has four toes, with the help of which it can simply climb trees and reach the treetops.

Read:  Michigan Birds: Most Common Birds in Michigan (with Pictures) A brown-headed cowbird, as its name suggests, is a bird that likes to chase around cows. It chases the cows in order to feed on the insects or pests that these cows have grown and inhabited on their skin, so because of it, these birds are named the “cowbirds.”

These are not adored by people as they have parasitic nature and endanger other species of birds.

The brown-headed cowbird we see today is the modified version of the original bird, which has changed over the years through evolution. These primitive birds of this species probably used to feed on the grass insects or the insects on the Bison herds.

These birds in recent years have grown to a large number as they have good adaptability skills, and because of this surge in growth, a lot of other birds have been affected as these birds lay eggs in the nest made by them. This has resulted in the endangerment of many species.

You will see them around the State of Arkansas, either flying around in the form of groups in the cold season or on the ground walking and looking for food. Around bird feeders, they will mostly be present. From Costa Rica to the south of Canada, these birds will be seen flying around. Even though these ruby-throated hummingbirds are very small in size, they still manage to migrate to various places. In just one second, these birds flap their wings about fifty times. These movements of their wings are super fast to human eyes.

You will find them feeding upon the nectar of various flowers and dancing around them. In gardens and In the open spaces, you can find them in the warmer seasons when they can bathe in the beautiful sunlight and enjoy the warm weather.

Whenever there are some intruders in the surroundings of the Ruby-throated Hummingbird or in the area where it usually feeds, then they become very aggressive. They would do everything to protect their territory. Their flights are amazing as if they have mastered it, just like the Rufous and the Calliope species of the hummingbirds.

Arkansas, with its four hundred species of unique and beautiful birds, is the best place for a birding experience. Our detailed article will help you identify not only some amazing birds in Arkansas but also learn some interesting facts and information about them.

Let us know about what birds visited your feeders today in the comments. Relating to these beautiful birds, You can also request us your questions below.

What big birds live in Arkansas?

In Arkansas, the biggest bird you will find is the red-tailed hawk. It has a chest and neck of cinnamon color, and its bottom is of creamy brown color. Its wings top and its back is colored brownish gray. It is four pounds in weight and four feet in its wingspan, with a length measuring up to 18 – 25 inches in total.

Are Cardinals common in Arkansas?

Yes, these are some of the most common birds in Arkansas; you will find them at the bird feeders commonly. They have beautiful, distinctive colors that will make them stand out from the rest of the birds.

What are the top 10 most common birds?

The most common birds throughout the year in the United States are these:

Are there Indigo Buntings in Arkansas?

Yes, you can find Indigo buntings throughout Arkansas. They are numerous with a brilliant blue color that makes them stand out. You can easily point them out if you see them flying around. Usually, they raise their babies here in the warmer seasons. These birds are the favorite of bird watchers.